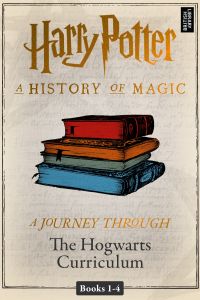 A Journey Through the Hogwarts Curriculum (Books 1-4)

This non-fiction eBook features content adapted from the audiobook Harry Potter: A History of Magic – inspired by the British Library exhibition of the same name. It is the complete collection of the four eBooks in the series A Journey Through… and will examine the colourful characters and curious incidents of the real history of magic, and how they relate to the Hogwarts curriculum of the Harry Potter stories.

Spells and charms have captured the imagination for hundreds of years. Warding off evil – with talismans and magic circles – is something that has concerned people throughout history; potions have long been made have been brewed by apothecaries to make medicines, drugs and poisons, including the elusive Philosopher’s Stone; and plants have been important components of medicines as much as myth-making and magic – from stink lilies to screaming mandrakes. In this way Charms, Defence Against the Dark Arts, Potions and Herbology are all important subjects in the wizarding world.

From the use of bones and shells thousands of years ago, to peering into teacups in the parlours of the nineteenth and twentieth centuries, for millennia people have strived to see what fate and fortune holds. The study of the night sky has fascinated those trying to read their destinies: from the star atlases of ancient China to the celestial globes of 17th-century Venice. As well as this, famous folkloric creatures – giants, dragons and merpeople – and lesser-known beings such as Acromantula and Hippogriffs, all play a key role in Harry Potter’s journey. As you’ll see, Divination and Astronomy, as well as Care of Magical Creatures, are as central to the Harry Potter stories as Harry, Hermione and Ron.

The history of magic is as long as time and as wide as the world. In every culture, in every age, in every place and, probably, in every heart, there is magic.