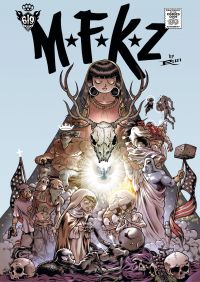 Dark Meat City has been gutted after the Blitzkrieg of the Machos,

entities spawned from the darkest matter of the Universe. Humanity

has no other choice than to unite its forces and try to resist, since

counter-attacking is impossible. The unified gang of Dark Meat City,

aka “The Big One”, organizes its troops and fraternizes with the

army, in a last-ditch survival effort to survive. But even as the

situation appears hopeless, and Angelino’s old demons catch up with

him, the first snowflakes begin to fall on the city…