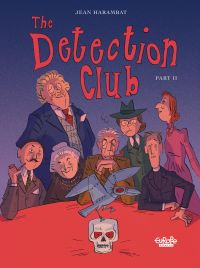 In 1930s England, the best mystery writers of the era come together to form the Detection Club. G. K. Chesterton, Agatha Christie, John Dickson Carr and others gather to eat, drink, and challenge one another. They are in for a bigger test, however, when eccentric billionaire Roderick Ghyll invites them all to his mansion on a private island off the coast of Cornwall, promising to enchant them with his latest creation: a robot that can predict the culprit in their novels. But when someone ends up murdered, who will lead the investigation? Jean Harambat is back, following the success of "Operation Copperhead," with a hilarious, satirical take on the classic crime novel.