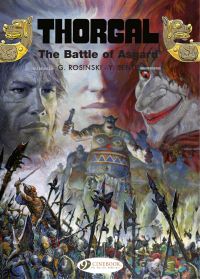 Thorgal - Volume 24 - The Battle of Asgard

Jolan, having triumphed in the trials set by his new master Manthor,

is now the Chosen One. At last his true mission is revealed: no less

mother, a goddess who was cast out! While he leads his army of rag

dolls to the realm of the gods, Thorgal follows the trail of the Red

Mages who kidnapped his other son, Aniel, the child he had with Kriss